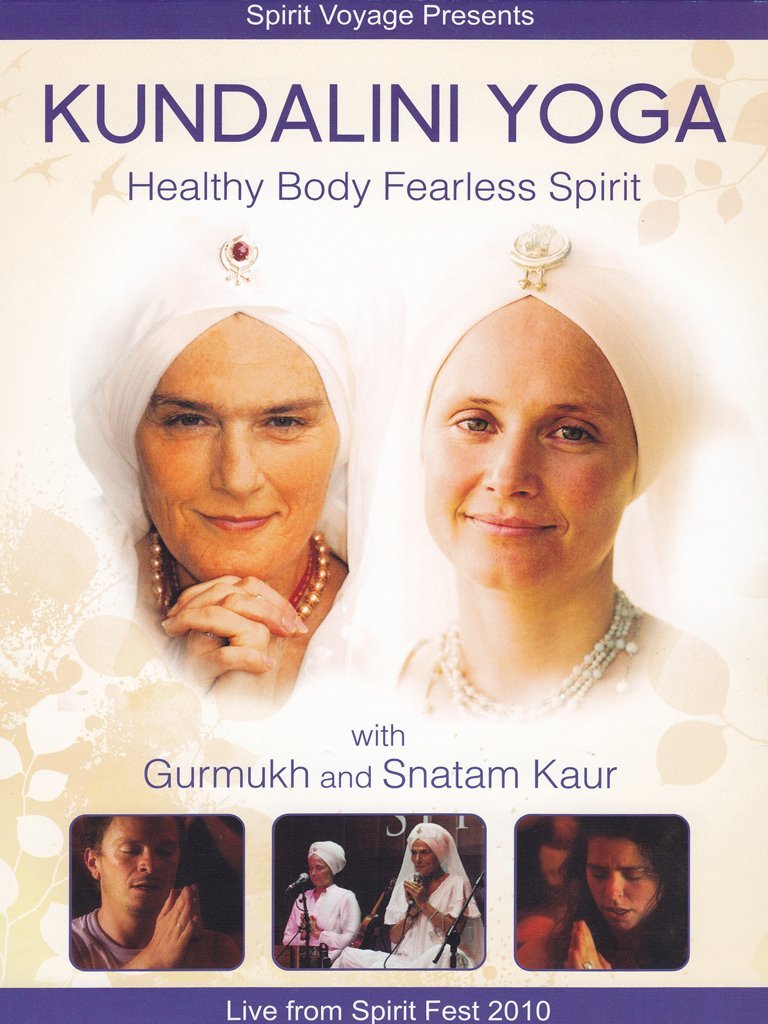 Gurmukh and Snatam Kaur teach this engaging Kundalini Yoga and meditation class together accompanied by incredible live music by Snatam Kaur, GuruGanesha Singh, Ram Dass and Ramesh Kannan. This DVD contains a yoga class to build immunity, detoxify the body from the inside out, and clear the way to approach the world from your heart. It is a great class for beginner's and experienced yogis alike, and if you give it your all, you are sure to get an incredible work out! Practice with hundreds of yogis in the comfort of your own home! Recorded live at Spirit Voyage's first Spirit Fest in September 2010, you will love the group energy that this DVD captures. When we showed this DVD to Gurmukh, she said "This is the future of yoga DVD's. No more sterile studios, let's bring the group class to people's homes." The incredible thing about this DVD is that you get a live concert and yoga class in in one. You will find yourself entranced by Snatam's voice while you work your body and spirit towards the goal of a healthy body and fearless spirit.

Snatam: Snatam Kaur was introduced to music and spiritual practice at an early age. Schooled in kirtan, meditation, and Gurmukhi, the Sanskrit-based language of Sikh scriptures from Northern India, the young Snatam Kaur began to develop the devotion and skills that have grown and blossomed into a compelling, profound talent. Snatam Kaur's parents brought her up in the Sikh tradition as taught by Yogi Bhajan. From an early age, she practiced yoga and meditation daily and her mother taught her Gurmukhi. "My mother taught me the alphabet on my way to school every morning," recalls Snatam. Her Sikh community augmented these lessons with instruction in kirtan (devotional chanting). "Through these experiences, I learned the pronunciation," she says, "but also I learned the passion for what I was singing because these gatherings were so spiritual." As a child, Snatam also had training in voice, violin, guitar, and percussion. She obtained a solid foundation in Western classical music while playing violin in an orchestra and giving solo performances. Her many opportunities to use and expand her musical talent in a spiritual setting emphasized for her the connection between her music and spirituality. "I learned about the importance of sound currents from Yogi Bhajan," she says, "but I also had the personal experience of how the energy of these sacred words can have a very real, positive effect." Snatam further explored the power of sound in India. After high school, her love for the Indian musical tradition and for children took her to Miri Piri Academy, a boarding school for children in India. She spent time taking care of the young children, teaching physical education, and providing music for the children's morning and evening chanting. When she returned to the United States, she attended Mills College in Oakland, California, where she obtained a degree in biochemistry, taught yoga classes, and shared her chants with Western audiences. But India called her back. After touring and performing Kirtan in northern India, Snatam settled in Amritsar where she studied music with the accomplished ragi (Indian master of Sikh-style kirtan) Bhai Hari Singh. This was a great honor for her, and particularly meaningful because Singh was the same teacher who had taught her mother when she was just a little girl. Gurmukh: Gurmukh Kaur Khalsa, 60, is the co-founder and director of Golden Bridge Nite Moon, Los Angeles' premier center for the study and practice of Kundalini Yoga and meditation. Since being baptized 32 years ago with the Sikh spiritual name meaning "One who helps people across the world ocean", Gurmukh has dedicated her life to fulfilling that responsibility. For nearly three decades students in Los Angeles and around the world have sought her classes in Kundalini yoga, meditation, and pre- and post-natal care. Her video series, The Method: Pre and Post Natal Yoga, features in numerous publications such as Vogue, Elle, InStyle, the New York Times, and appearances on Good Morning America have introduced Gurmukh to a wide audience and to the vast, ancient teachings of the yogic tradition. She is also the author of the forthcoming book, The Eight Human Talents: The Yogic Way to Restoring the Natural Balance of Serenity Within You (Harper Collins, 2000). Gurmukh is also a founding member of Khalsa Way, an organization created not only to offer Kundalini yoga but also to help people deliver and rear healthy children, as well as find success in their careers and relationships. She has been married for 21 years and has a 19-year-old daughter who attends school in India, where Gurmukh returns every year to teach and study.

The WHO is needed more than ever, but is held back by lack of funds and a structure that leaves it vulnerable to politics, writes Anthony Costello

∙Read our latest coverage of the covid-19 pandemic
What did the spending review do for population health?

The government’s spending review missed the chance to lay out an integrated plan to improve population health, argues this Editorial

editorial  |  Nov 8
What did the spending review do for population health?

The government’s spending review missed the chance to lay out an integrated plan to improve population health, argues this Editorial

Over 28 million more years of life were lost than expected in 2020 in 31 upper-middle and high-income countries, finds new research

Over 28 million more years of life were lost than expected in 2020 in 31 upper-middle and high-income countries, finds new research

Whole genome sequencing is a useful diagnostic test in patients with suspected mitochondrial disorders, according to this study

Whole genome sequencing is a useful diagnostic test in patients with suspected mitochondrial disorders, according to this study

COP26 diary: making health central to tackling climate change
Covid-19 and ethnicity: we must seek to understand the drivers of higher transmission
Underfunded mental healthcare in the NHS: the cycle of preventable distress continues
Covid 19: A strong pandemic response relies on good data
MPs not wearing mask was bad enough, but their defence of this position is even worse
David Oliver: Should single rooms be the default for NHS inpatients?
Covid-19 vaccination should be mandatory for healthcare workers
Building the future medical workforce: helping students choose psychiatry

Obstructive sleep apnoea/hypopnoea syndrome and obesity hyperventilation syndrome in over 16s: summary of NICE guidance
Even low doses of steroids increase the risk of cardiovascular disease in people with inflammatory diseases
Home based rehabilitation after a knee replacement is as effective as physiotherapy
Providing effective evidence based support for breastfeeding women in primary care
Loneliness is strongly linked to depression among older adults, a long term study suggests
GPs may help people at risk of self-harm by asking open questions and acknowledging distress
Women with kidney disease can be given a personal risk assessment for pregnancy
NIHR Alerts aim to help busy health and care professionals put research into practice

Priority setting and net zero healthcare: how much health can a tonne of carbon buy?

Covid-19: global vaccine production is a mess and shortages are down to more than just hoarding

Vaccination efforts around the world are being restrained by a shortage of doses. Jane Feinmann looks at what is holding up the process

Covid-19 treatments and vaccines must be evaluated in pregnancy

Pregnant women should be included in drug and vaccine development from the outset, argues this Editorial

40"Single Rose Gold Huge Alphabet Letter Balloons Aluminum FloatPast issues
Under-reporting of deaths limits our understanding of true burden of covid-19
analysis  |  Oct 12
Are vaccine passports and covid passes a valid alternative to lockdown?
head to head  |  Nov 3
How can I cope with my periods on a long shift?
careers  |  Nov 1
Routine antenatal care for women and their babies: summary of NICE guidance
practice  |  Oct 29

What are your thoughts?